Industrial robotics simulation is one of the most effective solutions to eliminate costly design mistakes that can often be discovered only in the late stages of the production workflow.

One of the leading vendors of the complex robotic systems challenged its software development group to enhance the company’s equipment with advanced software applications and AMC Bridge joined the group to develop a desktop application of a prototype simulator that enables robot teaching and simulates operations of robot systems for Hirata, an international production engineering company based in Japan.

Hirata is a global production engineering company that specializes in manufacturing production systems and machinery for a variety of industries, from automotive to medical and beyond.

On a mission to guarantee complete control over the quality and cost, Hirata set out to improve its simulation processes to reduce reliance on expensive physical prototypes and minimize late-stage design failures.

With the new project, Hirata aimed to overcome the limitations of its existing robot controller system to suit the advanced production needs.

The brand-new system was to expand the simulation capabilities and enable multi-robot testing, modeling of peripheral systems, and process visualization, among other requirements. Targeted at Hirata Prototype Robots, it was to be fully integrated with Hirata software components and use the HOOPS suite for 3D visualization.

Looking for a vendor with a track record of top-notch performance, extensive expertise in the technology stack, and a highly professional team, Hirata entrusted AMC Bridge with developing a desktop application of a prototype simulator from scratch.

A user-friendly UI gives users an intuitive grasp of the application capabilities and renders it perfectly optimized for a quick start, which significantly minimizes the investments in training.

The AMC Bridge team was charged to develop a top-level simulation application, create its UI/UX design, and resolve numerous integration risks that could arise when combining various software parts and third-party libraries.

To ensure that the project was always on the right track, the team delivered weekly status reports and held meetings with product demonstrations every two weeks.

At the initial stage, the team conducted exhaustive research of the domain field to offer the best development decisions for the project implementation and created a functional specification based on the requirements provided by the customer.

Following the successful proof-of-concept delivery, the team concentrated on enhancing model operation and user experience, including the development of a change tracking engine that exceeded the initial requirements.

The resulting application helped to reduce the production cost by empowering Hirata to uncover and eliminate errors at the design stage and offered a sales advantage by providing a virtual demonstration of the product before it is manufactured.

Seamlessly integrated with the native Hirata software, Hirata Robot Simulator was adopted in no time, starting to add value to Hirata operations from day one.

An additional benefit that Hirata realized from the developed application was the possibility of using it as a stand-alone simulation software for a variety of Hirata products.

Commenting on the excellent cooperation with AMC Bridge, Mr. Hironobu Yoshizawa, Manager of the Robotics Business Department, remarked: ‘Your engineering software development skills should be used more in Japan.’

As construction robotics is gaining traction in the industry, AMC Bridge is looking for technological approaches to help our clients on their way to automation and digitalization. The Robotic Construction Caulking for Autodesk Inventor® proof of concept (POC) demonstrates how robot-based sealant application to wall panels can be designed and simulated using the Autodesk Inventor® CAD package and Robotics Library™.

Robotic Construction Caulking for Autodesk Inventor® is a proof of concept (POC) that demonstrates design and simulation of robot-based sealant application to wall panel elements utilizing the capabilities of the Autodesk Inventor® software and the features of the Robotics Library™. 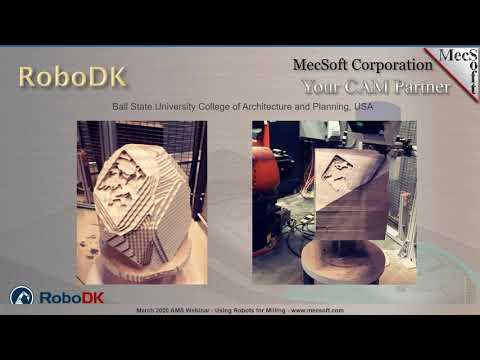 This example shows how to create a 5-axis robot machining project for sculpting using RhinoCAM and RoboDK. This project uses a KUKA robot synchronized with a linear rail and a two-axis turntable (9 synchronized axes).

Request a meeting with AMC Bridge

Thank you for contacting AMC Bridge. We'll get back to you with an answer.

The form has been filled incorrectly. Please check and try again.